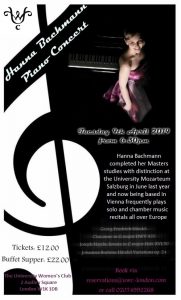 Please join us for a Piano Concert on Tuesday 9th April 2019.

Hanna Bachmann completed her Masters studies with distinction at the University Mozarteum Salzburg in June last year and now being based in Vienna frequently plays solo and chamber music recitals all over Europe.

Recent concert appearances include performances in Mexico (playing as soloist with the Orquesta Sinfónica de San Luis Potosí amongst others) and at the renowned Austrian festival Schubertiade, as well as in famous Musikverein in Vienna, at ‘Kultursommer.Semmering’ and at Beethovenfest in Bonn. Furthermore, she will give her debut at Berlin Philharmonie in December this year.

Her debut CD has been praised by the press and at the moment she is recording Beethoven’s Diabelli Variations amongst others for her second CD which is being dedicated to the topic ‘humour’.

The programme is centred on two composers who visited Great Britain – Händel and Haydn. While Haydn’s joyful sonata is confronted with Prokfiev’s sarcasm, Brahms’ op. 24 picks a Handel aria as the theme for his impressive variations and thus completes the circuit.

Login below to see our full events calendar

Apply for a membership