Did you know? The KGB lamppost 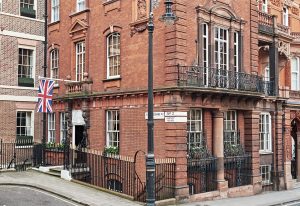 The University Women’s Club is situated in a square that is hardly a square but rather a small enclave off South Audley Street.

Outside the club stands an ornate Victorian lamppost, which has a trapdoor that during the Cold War was used by the Soviet embassy as a dead letter drop. A chalk mark on the lamppost base would indicate a delivery. Intriguingly, whilst KGB spies were lurking on the doorstep of the club, next-door at No 3 Cubby Broccoli was busy casting unknown actor Sean Connery to play the part of a spy called James Bond in his new film ‘Dr No’.

How to find us & getting in touch

If you wish to visit the Club, please use the map below. Alternatively, please find our phone, email and address details above.

Apply for a membership